When using the Openvswitch to attach virtual network interfaces to the node internal switching layer, the mechanism driver „openvswitch“ must be used. The Openstack documentation shows a few use cases, how to set up the ovs bridges on compute and network nodes. Depending on the type of the network (vlan, vxlan, flat,…), different suggested setups are shown in the Openstack documentation. These setups are taken by many people as the only ones, which are supported. But this is not true. Openstack networking using the Openvswitch can be set up using only one interfaces for all customer traffic, even when using Vxlan, Vlan and Flat networking on the same compute or network node at the same time.

I recommend to set up the basic OS layer networking on compute and networking in the same way for both node types.

The following is applicable to the Openstack release Icehouse, Juno needs to be checked.

If tunneling is used, the tunneling bridge br-tun is connected to br-int. This connection is managed by Openstack neutron and is using an Openvswitch patch port.

If Vlan or Flat network types are used, another bridge, e.g. br-eth1, is connected to br-int. This connection is also managed by Openstack neutron and is using a Linux veth pair, which is a serious performance bottleneck.

When using Vlans in the physical infrastructure, which should be available in Openstack, the type driver vlan must be used. The Openstack default setup is shown in the following figure: 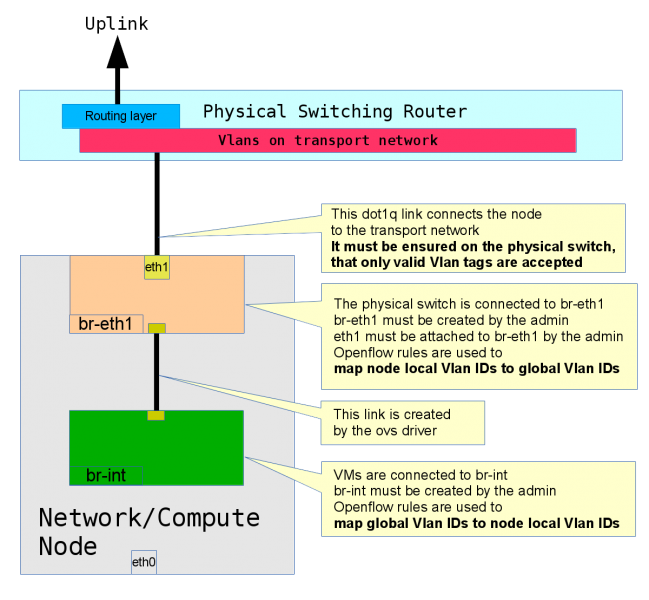 On the operating system layer the following commands must be executed, before starting any Openstack component.

In Ubuntu, these commands can be integrated into /etc/network/interfaces (-> article Boot integration of the Openvswitch in Ubuntu).

If we assume, that the physical switch provides the vlan range 100-199 to be used by Openstack. The physical switchport on the switch must be dot1q tagged and the valid range of vlans must be restricted to the range 100-199. Why? In the case of an Openstack neutron failure or error, it might be possible, that the Openflow rules to map the local vlans to the global vlans on br-int are wrong. The result will be a mixing of local vlan and global vlan IDs.
The ml2 config may look like:

This configuration tells the Openstack and the Openvswitch mechanism driver, that

The following figure shows a setup using two tagged links on the bridge to attach the physical links. In this example, the bridge is named br-vlan, because there is no naming dependency between the bridge and a physical interface. br-vlan should be used as a name in any configuration to make the connection to the vlan type driver, instead of using br-eth1 and making the connection to eth1. 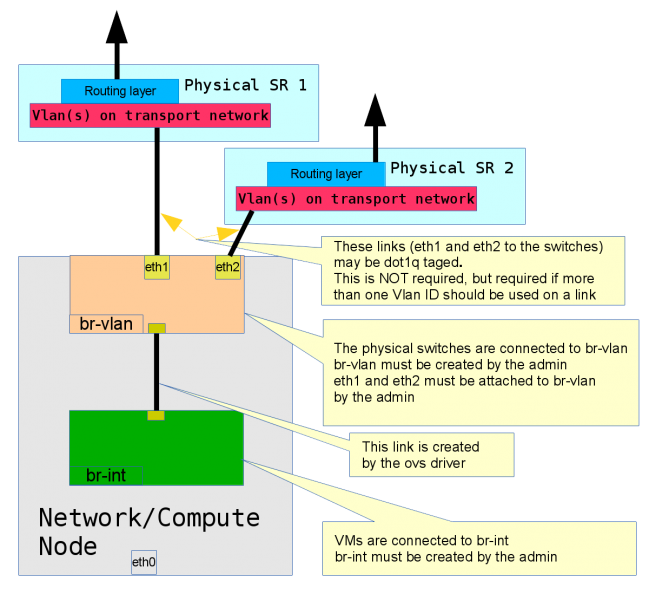 One can see in the ML2 configuration, that there is NO reference to the physical ethernet interfaces eth1 and eth2. Openstack does not care, how the external connection is set up on the bridge providing vlans for the vlan type driver.

The link between br-vlan and the physical switch needs not to be tagged, as shown in the next figure. This is not a very useful practical setup, it shows one other possible setup. 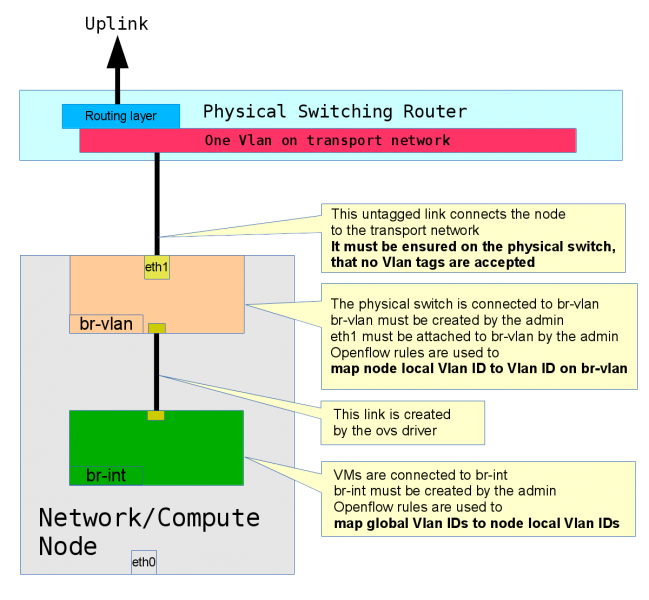 eth1 is not tagged. On br-vlan, one dummy vlan (888 in our example) is used to map eth1 to a vlan, which can be referenced by Openstack. It is a good idea to use the same Vlan ID on br-vlan as on the external switch, if the switch is using vlans. On the operating system layer the following commands must be executed, before starting any Openstack component.

Openstack requires a Vlan on br-vlan when using the type driver vlan – we use 888. The ml2 config is using only one vlan. The vlan ID 888 must be used, when creating a network in Openstack. This example makes only sense, if only one (shared) provider network is used to attach VMs to.

There is no need to use just one network interface when using the vlan type driver. More than one interface might be used on the uplink side of br-vlan. These interfaces might be tagged or untagged.

The fact, that Openstack does not care how br-vlan is connected to the external network, leads to another interesting solution to connect br-vlan to the outside world. More to come…