The networking part of Openstack provides several models for the L2 networks to be used as L2 tenant broadcast domains. An overlay network can be used to separate the MAC addresses and „vlans“ of the tenant networks from the transport layer network.

Openstack neutron in Havana supports two overlay network technologies, GRE and VXLAN. VXLAN is my preferred solution, because it provides more entropie on the receiving NIC, which results in a higher performance, because multiple CPU cores are used to process ingress packets.

In this article I’ll show the implementation of VXLAN on three nodes. Two nodes are used as compute hosts, one node is used as the network node. On the network node (NN) several Neutron agents are running:

On the compute nodes (CN), only the L2 (OVS) agent is necessary.

A typical Openstack deployment is using one instance of the OVS,  br-int, as the point to connect all VMs, DHCP servers and the „non default gateway“ side of all routers. br-int is using classic Vlans to separate the broadcast domains.

br-tun is a second OVS instance, and is used to provide the VXLAN function. br-tun is connected to br-int via an internal link. This links is a trunking port, it is using dot1q tagging to transport vlan ids-

When configuring Openstack Neutron (Havana not using ML2 ) I recommend to change the value of the tunnel ids in the neutron config to:

Changing this from the default values, which are below 4096, has the great advantage, that it easy to distinguish vlans ids from vxlan tunnel ids. This helps to understand the Openflow rules provisioned by neutron on br-tun. Why using 65537 as the first tunnel id? Well, 65537 in hex is 0x10001 and the OVS shows tunnel ids as hex values. It’s easy to read….

When using Openstack Icehouse on Ubuntu with ML2, the openvswitch plugin is not longer used. Any openvswitch config must be put in the ml2 plugin config file, using the section „ovs“.

My recommendation is, to use different ranges for vlans, vxlan tunnelid’s (vni’s) and gre id’s.

This leads to the following setup as shown in the drawing (without showing the second compute node), which is using eth1 as the IP interface to transport the VXLAN traffic and br-ex to attach the routers to the public address pool 198.18.1.0/24. 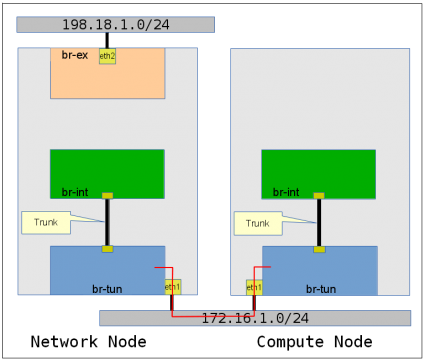 On the VXLAN transport network it is very important to use jumbo frames. If you choose 1600 instead of the default 1500 you’re on the safe side. The VXLAN tunnel overlay requires an additional UDP header on top of a full sized ip packet. Without jumbo frames the performance of GRE and VXLAN overlays drop to less than 100 MBit/s – instead of using 10 GBit/s and more. This performance drop is caused by the required packet fragmentation and defragmentation CPU processing needed on the sending and receiving side of the tunnel.

Now we take a look at br-tun. First we get the ports using the command ovs-ofctl show br-tun and a following grep to filter unnecessary output.

The openflow rules can be shown using the command ovs-ofctl dump-flows br-tun:

The Openflow rules shown, use different tables. table 0 is processed as the first one. Each table has rules with different priorities, the rules with the highest priority are checked first. At this stage, the rules do not make much sense.

The output below shows the checks done for an unicast packet entering from port=1.

Openflow rules after the installation or br-tun

At this stage, br-tun drops all traffic entering on one of the three ports. This is fine, as we did not configure anything as a tenant within Openstack.

Add a router, one network and one subnet.

Now it ’s time to add networking from the tenant’s perspective within Openstack. The tasks are:

After creating the tenant network, the Openflow rules on the nodes for br-tun looks like:

Openflow rules on br-int after creating one tenant network

Two rules have been added:

Start a VM on compute node 1

After starting a VM on compute node 1, the Openflow table on br-tun looks like. 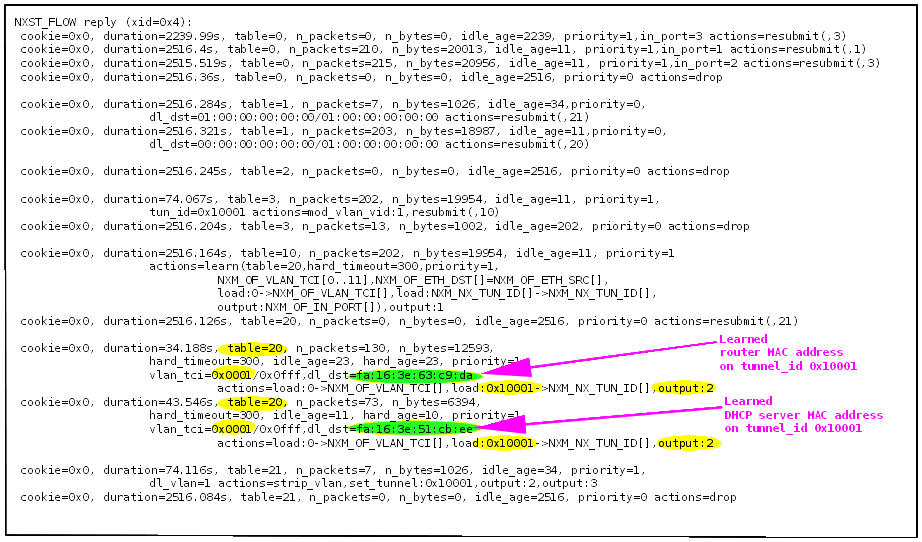 Openflow table 20 contains two new rules, which have been inserted by the learning action of the Openflow rule in table 10. The two new rules contain the MAC addresses of the router and the DHCP server. Port 2 is the VXLAN tunnel to Compute node 1.

On the network node, a similar learned Openflow rule appears in table 20. This rule contains the MAC address of the VM.

Unicast packet transmission from the VM on the compute node

When the started VM on the compute node transmits a packet with the destination „router MAC address“, the walk through the Openflow rules on br-tun looks like: 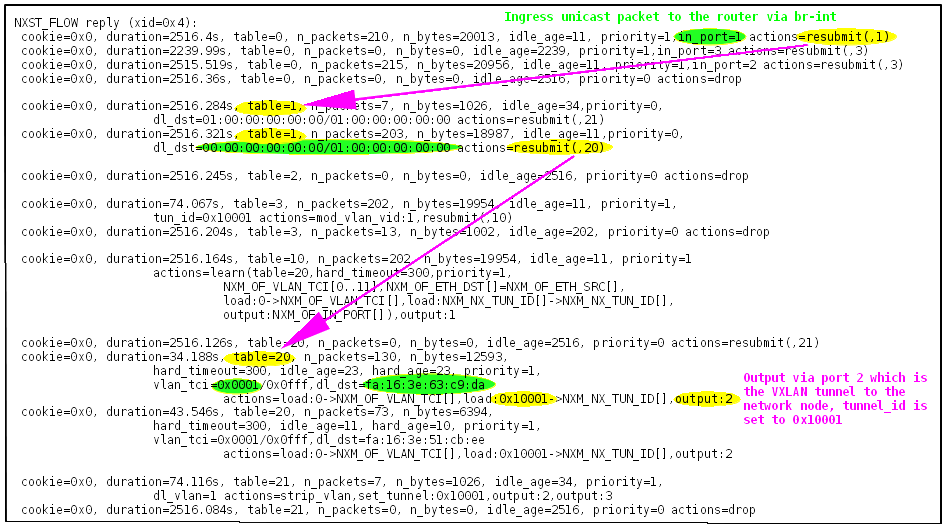 Any packet entering table 20, which does NOT match any of the rules with priority=1 is processed by the priority=0 rules of table 20 and resubmitted to table 21. The prio=1 rule in table 21 „floods“ the packet to ALL nodes in the mesh using unicast.

Packet sent to the VM

When the started VM on the compute node receives a packet, the walk through the Openflow rules on br-tun looks like: 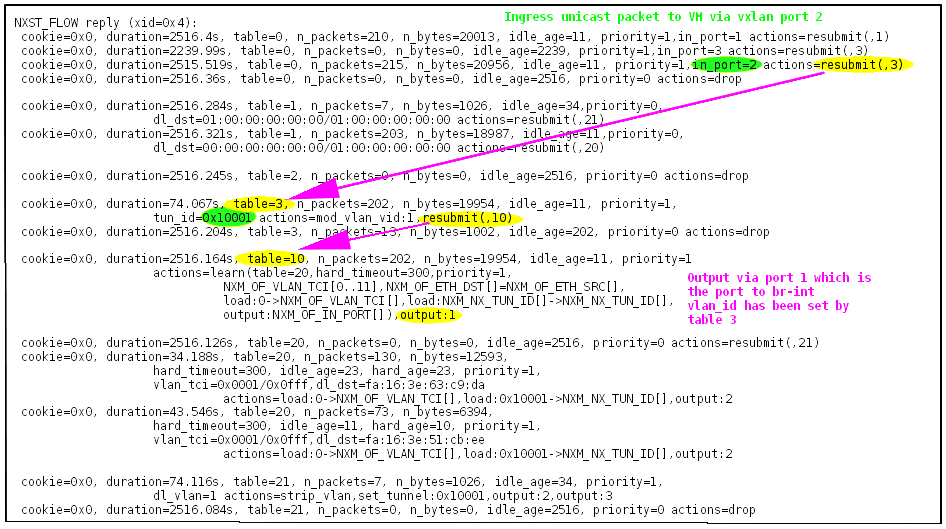 Openflow rule walkthrough  when a packet is transmitted to the VM

The implementation of the vxlan mesh in Openstack Havana is straight forward. It provides a working L2 connectivity when running IPV4. Anyhow, it misses features, which are delivered even with cheap hardware switches. These are:

To optimize the traffic handling other features must be implemented to allow scaling to high node numbers.